Partner of the Quatuor Psophos.

Works in a mill in the Landes, region of France. 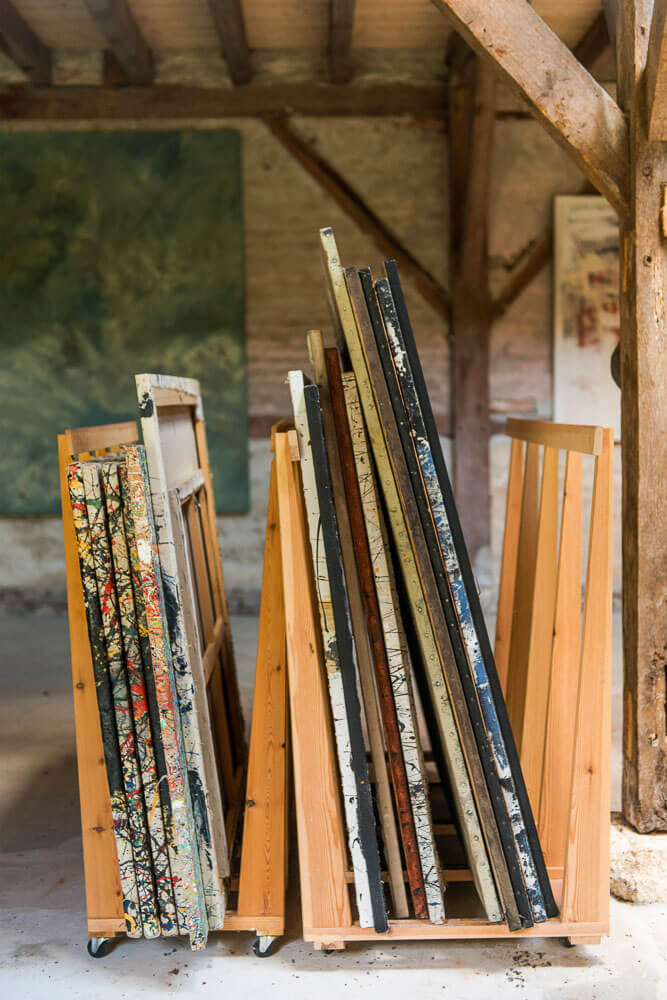 Over ten years ago, Anne Bournas chose this place, quiet as a hermit’s retreat: a small green vale
hemmed by a sandy path on the edge of a large pine forest. At times braving storms, at times facing
foresters, these woodlands are inherent to the monotonous charm of the Landes landscape. Stumps,
scattered branches, ferns and rays of pink or orange light on the rough blackened tree trunks under
versatile skies. This beauty may not be the most spectacular, nor the most docile, but for those who
understand its subtle melody, it is an infinite treasure.
From the house, a bright green meadow stretches down to a stream. Around the house, Anne
Bournas has created such a welcoming and peaceful haven that it sometimes seems oblivious to its
surroundings. This is where she paints, exploring the world with her colours, an inner world that here
and there will resemble the land she lives on.
In her paintings, the moon, forest, sand, the stones so seldom found in these parts, the sky, and of
course the ocean mirror the passing seasons. Anne Bournas touches on them with an infinite
delicateness, offering them the same extreme attention she pays to the people and things around
her. In her painting, this quality may translate as a form of distance, or sometimes even abstraction
in some of her works. It is an ethical choice, the expression of a respect for life and a celebration of
the infinite movements of form and matter that Anne Bournas would not want to stifle into
representations that would be rigid or too descriptive. Her work is about accompanying, confronting
the movement of forms and elements, rather than capturing or reproducing it. In order to achieve
this, she uses oil paint but also some of the archetypal elements of the Landes landscape: sand, tar or
heather that come to life once more in her work.
Anne Bournas’ art is inspired by the experience she has of her surroundings, the repetition of days in
this environment intertwining spleen and splendour, happiness and sorrow, lassitude and hope. It
also draws on literature, her other great passion. The artist, a former reader in a publishing house, is
surrounded by an incredible collection that constitutes her own inner horizon. Opened and enjoyed
over and over, warmed by a careful touch, the books respond to the green and gold beams of light
from the garden. In her Landes home, Anne Bournas journeys day after day from a world full of
words to one full of silence, on a bridge of her own making.